Sup Mag is one of the biggest SUP dedicated magazines in the UK.

“Rotomoulded stand up paddle boards aren’t a new concept. Back at SUP’s inception a few overseas brands had some kicking about. Somerset based Fatyak, however, are the first British company to bring a plastic board to market and it’s the Samos we review here.

Anyone familiar with sit on top kayaks may have heard about Fatyak. Offering a bunch of sit down paddle designs it was only a matter of time before a FY SUP appeared. The Samos is an unusual looking beast. A myriad of chines and channels run through the hull and deck giving a slightly ‘tech’ appearance. Fixtures and fittings are similar to what you find on FY’s kayaks with an overall finish that’s polished and high end. 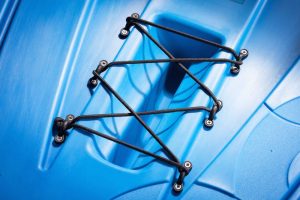 With its 10 feet of length and  36” inches of width(!) the Samos is a stable platform to say the least! You literally have to run off the Samos to fall off it. Combine this with a planted feel and there aren’t many boards that could rival it in terms of composure. Heavy weights, and newbies at that, should have no trouble getting to grips with SUP if learning atop a Samos.

Sweeping forwards and there’s a bulk of thickness up front in the nose area. This keeps the Samos locked in and directional. Together with the hull’s chines tracking is pretty good and even allows the Samos to be paddled sans fin. You do gain further efficiency when actually using the US box skeg but it’s nice to be able to use the Samos without in barely a foot of water – great for teaching anxious beginners who don’t like going out of their depth. 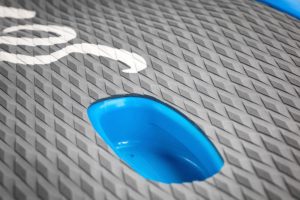 Manoeuvres are achievable – there’s certainly no reason why SUPers can learn to pivot turn and be proactive with footwork – it’s a livelier sled than you’d think. And while you could of course take the Samos into small waves it’s not really the board’s forte. 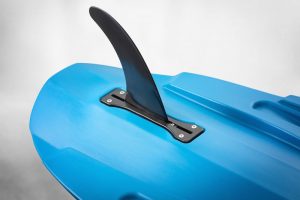 Learning to stand up paddle, cruising and even loading up with fishing gear and/or touring essentials are where the Samos really fits the bill. With such a stable platform it’d be a crying shame not to utilise this. And don’t forget the board’s construction lends itself to harsh environments making it great for rock hopping and craggy coastal discoveries.”

We hope you have found this useful!

Related Articles: How to Paddle an SUP in a straight line,  The Man Outdoors review the Samos SUP

This site uses Akismet to reduce spam. Learn how your comment data is processed.