Kayaking is currently the fastest growing watersport in the UK. Not only do we think this is due to how much fun is involved (just ask our customers!), but also that kayaking is now incredibly accessible. High quality, affordable kayaks, such as our own products featured on this blog, offer an easy route into the water for beginners to the sport. 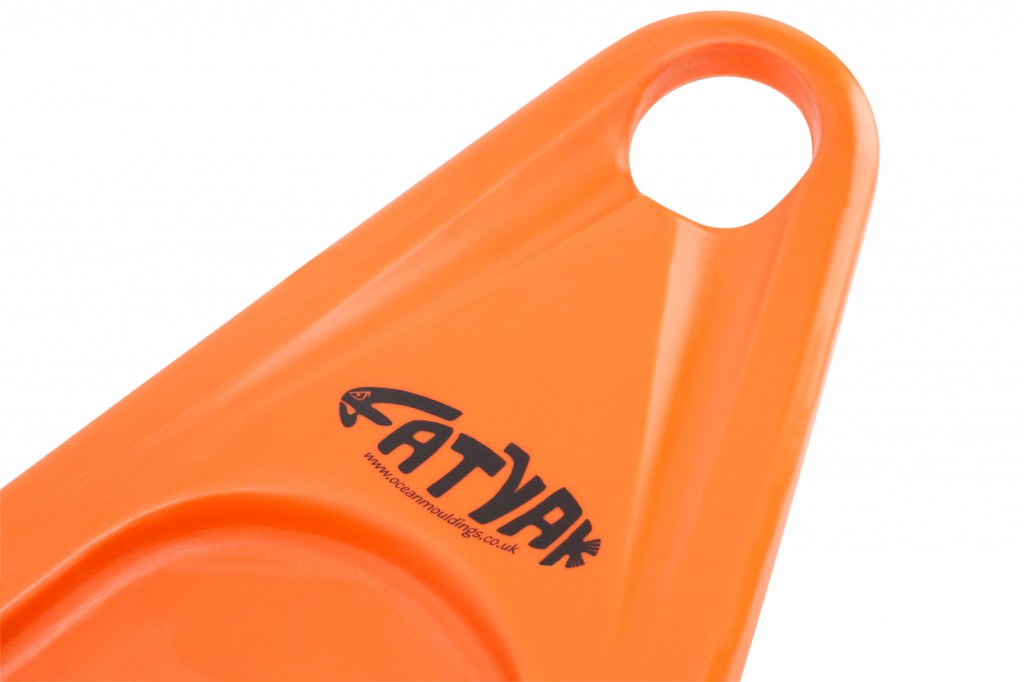 However, while this is undeniably a good thing, the potential dangers inherent to the nature of extreme sport must still be realised. The RNLI have released a warning regarding the usage of kayaks, particularly in coastal waters. While many RNLI members own kayaks and participate in the sport themselves, there is ubiquitous agreement on the importance of taking care on the open sea, and ensuring that you know what you are dealing with. This was in response to a case involving two kayakers that got themselves into trouble on the waters just off Minehead in Somerset, about 20 minutes from where our Fatyak™ Kayaks are manufactured.

The important things to bear in mind when enjoying all that the water has to offer in your kayak is to be familiar with your location, in line with your personal skill level. Calm water areas such as Wimbleball Lake, in Somerset, can be ideal for beginners due to their relative predictability, available facilities and obviously, calm water. The open sea can be a bit more risky due to change in currents, tides, the effect weather can have, as well as unpredictability. Knowing your boat is key too – practicing manoeuvres such as eskimo rolls in the event of capsizing, for example. The Fatyak™ product line has improved safety in this aspect as opposed to traditional designs, due to the “sit on top” design, meaning the boats are unlikely to capsize, very stable on the water and easy to manoeuvre, yet remaining versatile for all skill levels. If the boat does capsize the sit-on-top design allows for an easy escape.

Realising the potential hazards involved, and the responsibility involved when there are an estimated 1.2 million lovers of kayaking in the UK, Fatyak™ takes certain steps in development to help keep the sport as safe as it is fun. Not only are our kayaks safety-conscious in their design, but each kayak is shipped with a safety booklet, detailing points to consider before setting off, being in the water, as well as safe storage and maintenance of your kayak. In addition to this, there is safety advice moulded into the kayak itself, as well as the recommendation to take an instructional course before getting involved with some quality Fatyaking™ time!

Last weekend we got involved with hosting the Minehead Harbour Fest (link) – bringing #fatyaking™ to Minehead Harbour with taster sessions and Fatyak™ races – with £500 for the winner.
Minehead Harbour Fest is a new concept for 2015 born from the RNLI Raft Race – an event that has been running for 35 years along the coast from Blue Anchor to Minehead. This year the Raft Race was developed from a one-day to a two-day event on the Harbour full of live music, fun on the water, and street entertainment for the masses to enjoy. The festival was run in association with our own selves, and The Old Ship Aground pub, located right in the thick of the action. As well as providing a weekend of fun, the aim was to support money for the RNLI who obviously play an invaluable role in all that the weekend stands for. 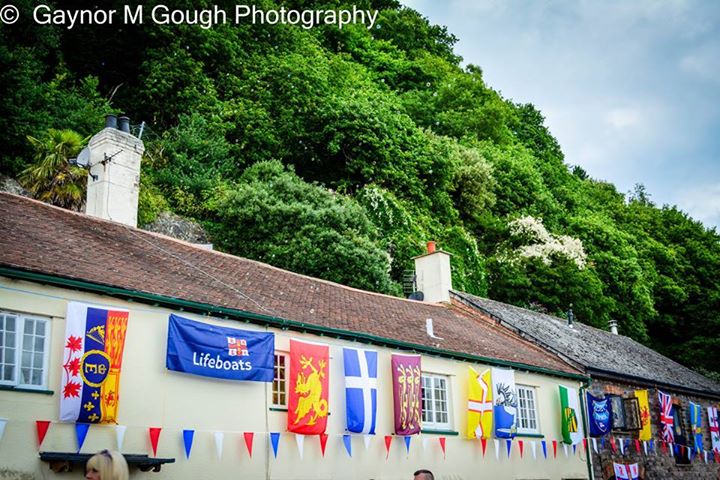 This new concept was a spectacular success this year, with the finest local paddlers being pitched against each other in pursuit of a £500 prize – all in our very own fleet of fatyak™ kayaks down in the harbour. 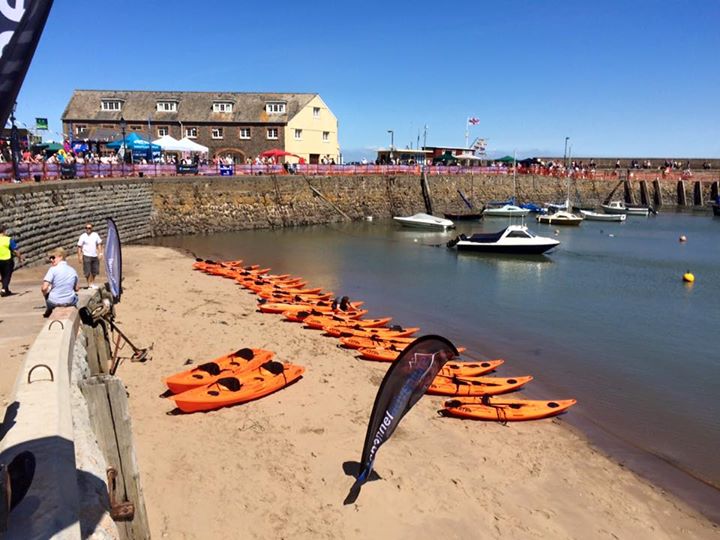 The amount of registrants increased exponentially on the day as the hype began to build, with Steven Dodd, Special Olympics Kayaking Twice Silver Medallist amongst the mix, and the atmosphere was fantastic – with some extremely exciting paddling and weather that could not have been better! The course consisted of a sprint out to a buoy just past the harbour area and back, made up of 3 heats, with safety monitoring kindly provided by the RNLI team. 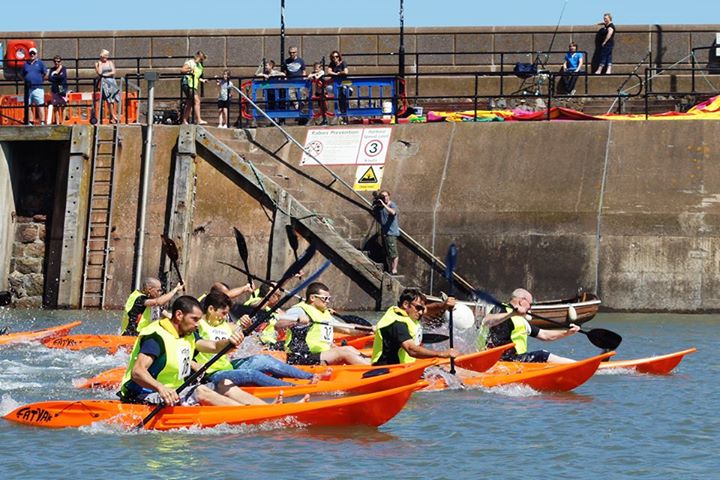 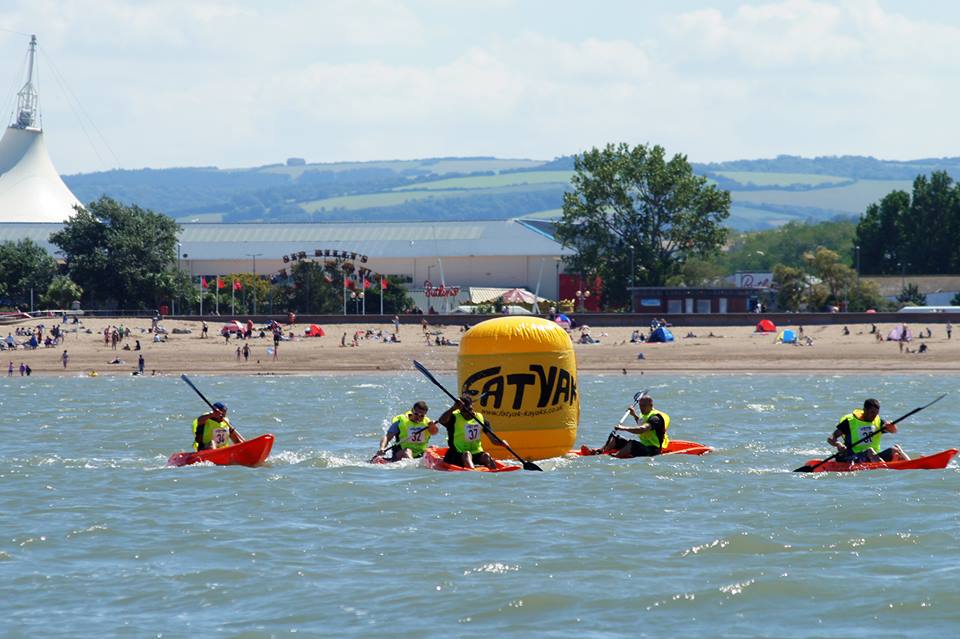 Midpoint of the Sprint 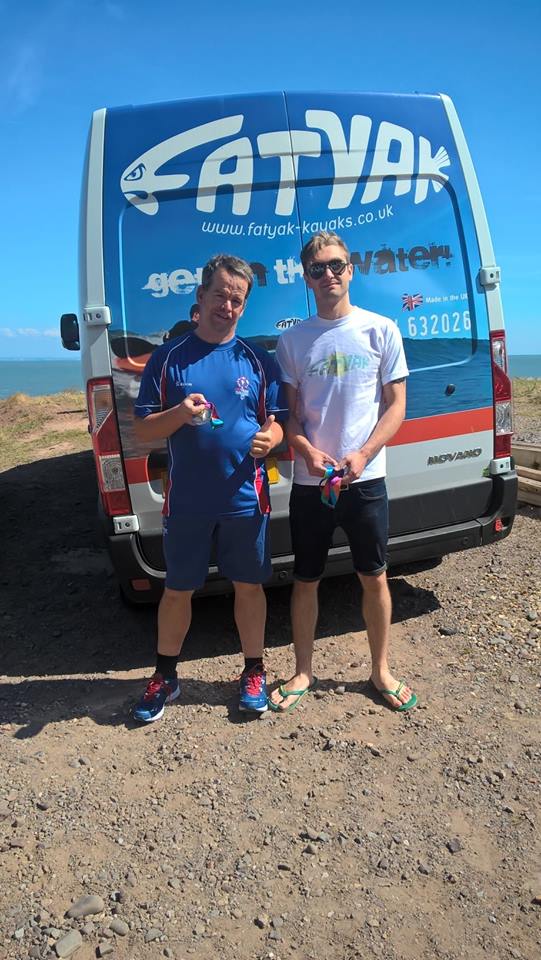 The main event of the Sunday was, of course, Minehead’s beloved raft race! The course was shortened this year due to safety concerns, running from Butlins as opposed to Blue Anchor but the event was just as legendary as ever with teams from as far as Hertfordshire entering the pro race.
As well as the professionals, we had teams consisting of the Minehead Barbarians rugby squad, Staff from our local Tesco supermarket, the “blind mice” from Minehead Specsavers and many more all bashing hulls in the fun race! Not to mention Fatyak™ Kayak’s very own raft which also competed in the pro race. 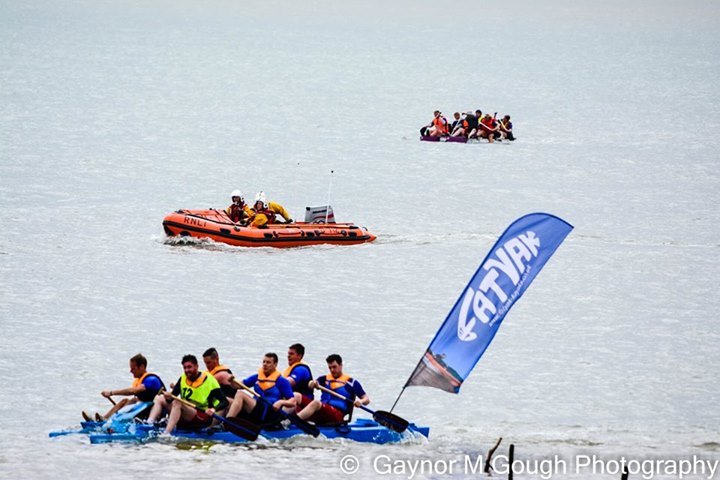 The Fatyak™ Team Raft tearing it up!

Teams competed for an array of prize categories including most original raft, the pub challenge, best fancy dress and the first local crew – full details of which will be included in the end of this post. 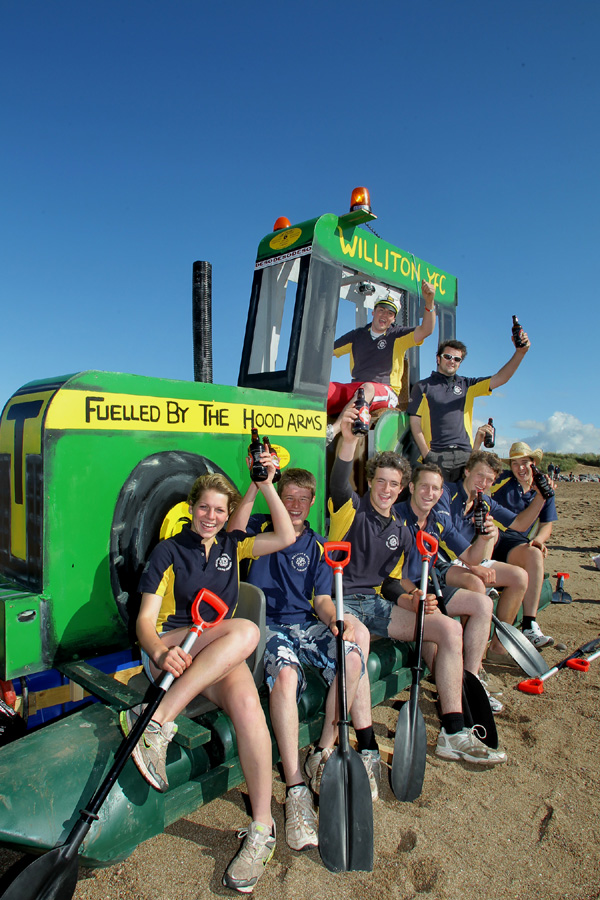 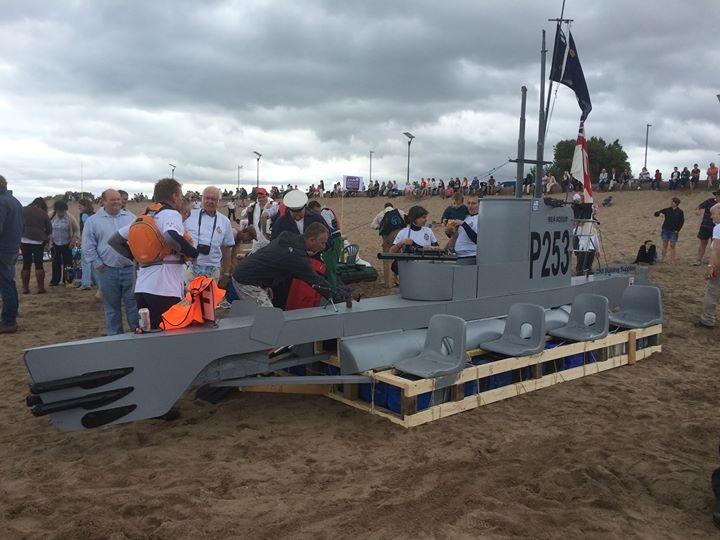 While the Raft Race was underway, back at the harbour we were running Fatyak™ taster sessions – we were fully booked with keen fatyakers™ for the majority which was absolutely great to see, especially since so many had never been on the water before! We were helped hugely by Channel Adventure in keeping everybody safe and allowing a fun and informative session to take place. 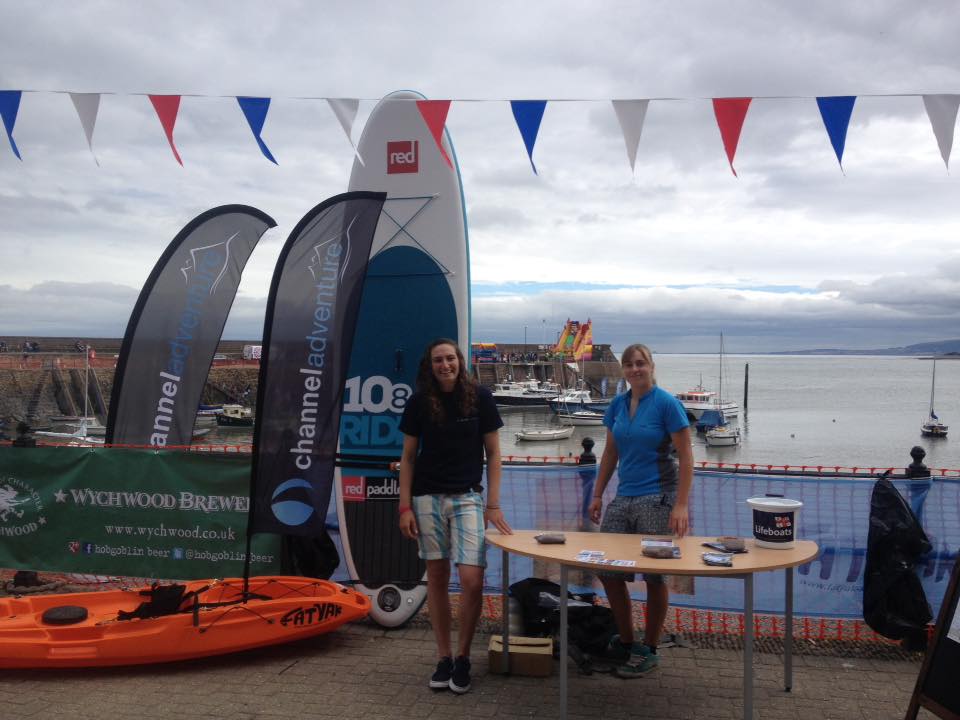 Tying together the burbling atmosphere of the weekend once the sun began to set was, of course, the fantastic live music acts organised by The Old Ship Aground including The Thatchers, Soulville Express, Pearl & The Diamond Geezers, Acoustic Roots, Little Betty, and The Salt Flat Rats – all with added music and entertainment by Tone FM DJ Drew Haddon. Commentary was provided to contextualise the action throughout the daytimes by Drew Haddon and Josh Searle of Tone FM, with a link from Phil Sanderson of the RNLI from the Safety Boat – keeping the masses updated regarding life on the water.
The staging and lighting provided by NBP Sound and Lighting Hire lit up the harbour once darkness fell, providing a brilliant backdrop for the selection of bands on offer throughout the weekend. 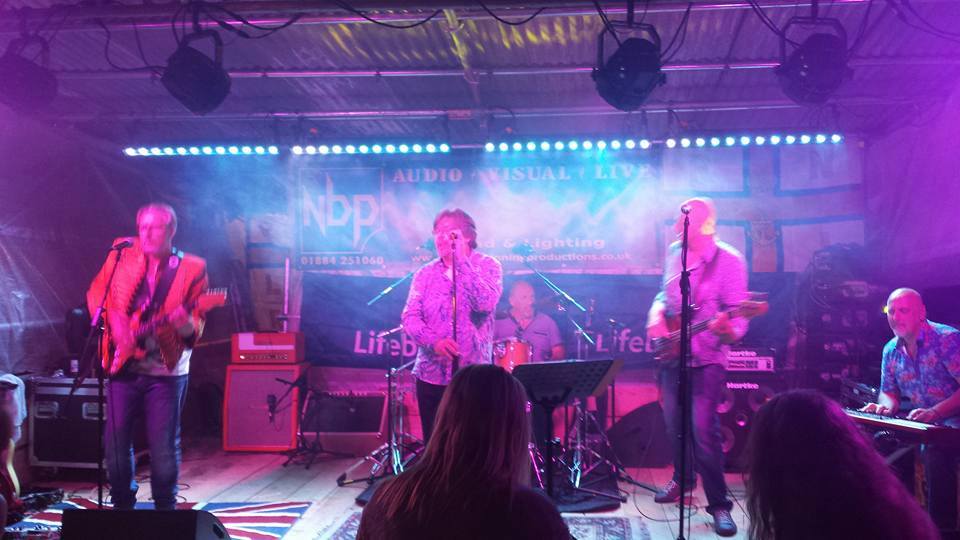 And speaking of lighting up the harbour, with help from an array of firms, a spectacular firework show was funded and put on display for the town to enjoy. 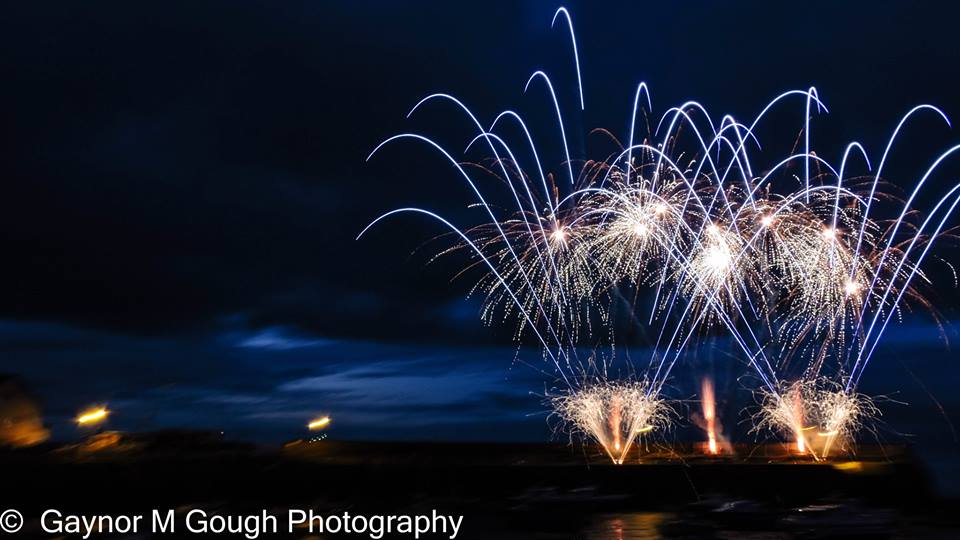 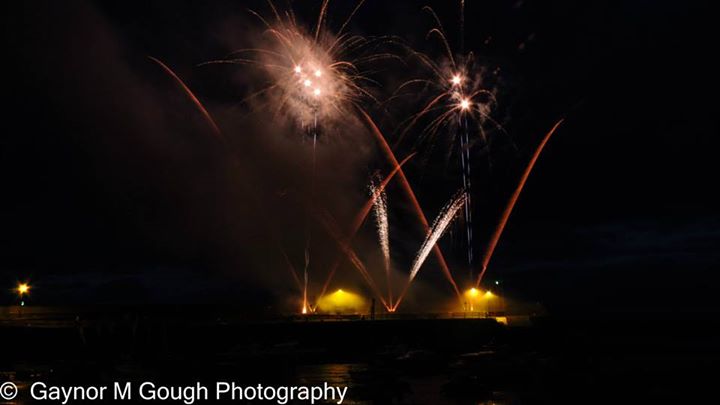 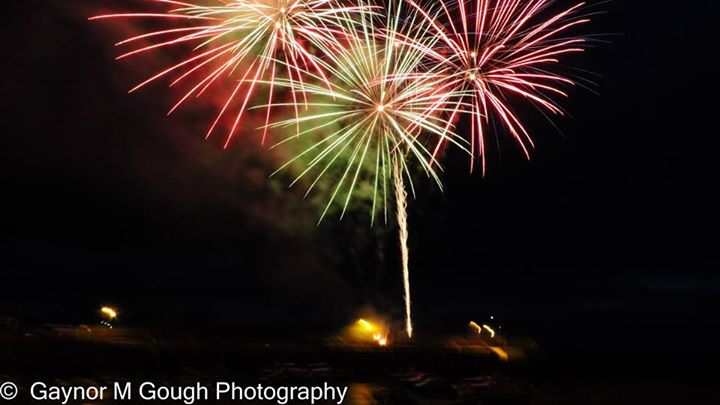 Last but not least…

Overall the weekend was a huge success and we would like to offer our most sincere thank you to everyone who attended, and everybody involved in hosting the event. A congratulations is in order for Fastest Paddler, David Farr, who won the Fatyak™ Races with a blistering time of 9 minutes and 23 seconds as well as winners from the other prize categories:
Fastest Female Paddler – Jane Dunn
Fastest Youth Paddler – Ben Pye
Fastest Youth/Adult Paddlers – Henry & Phil Young 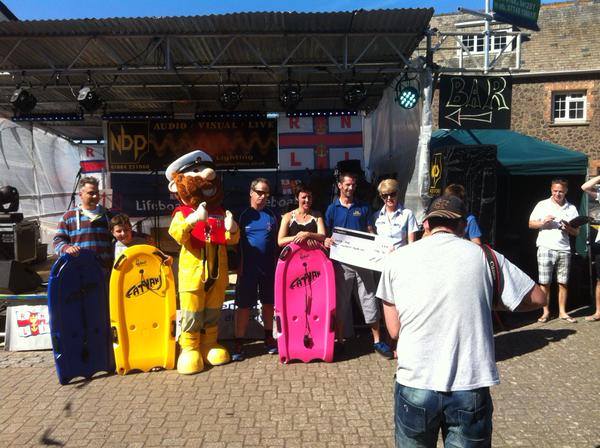 The full results for the Raft Race are included below;

A huge thanks again to the RNLI, whose work encapsulates the spirit of everything the weekend was about, as well as The Old Ship Aground for their never-ending support of the event, and being the lifeblood of culture on Minehead Harbour. See you all again next year!